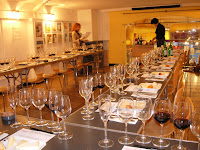 Cheese and Accompaniments of the Mediterranean


On February 27th I went to a program of the New York Women’s Culinary Alliance presented by the Manager of Murray’s by Mail, Amy Sisti, and Michele Buster of Forever Cheese. Wines were donated by C & P Wines, NY. 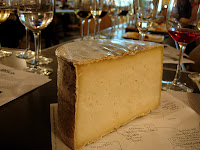 The program was presented in the glass-walled second floor auditorium overlooking the cheese shop on Bleecker Street, seating 24. Tables were precisely and generously set with full platters of cheeses and six wine glasses. Michele, with a slide presentation, told about the producers of the cheeses and condiments she joyfully finds and imports from Spain, Portugal and Italy. 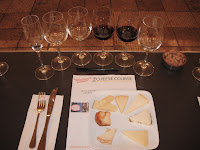 All the while Michele stressed the importance of having fun with pairing and tasting as different combinations could be put together with the flick of the tongue.

Next tasted was a rosemary coated goat cheese, Cabra Romero, very white and mild, also paired with the Cava and a luscious, raw, Spanish lavender honey.

The fourth cheese, Malvarosa, from milk of a rare, Valencia native breed of sheep, the Guirra, formed by knotting in cheesecloth. 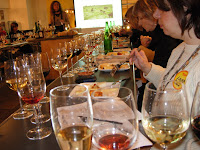 This was paired with a red Sonsierra Crianza, and a thick, earthy and delectable Arrope Jam made of concentrated grape and candied pumpkin.

Number five was a goat milk cheese, PataCabra that paired nicely with a tangy Pear Mostarda and the red and oak-y Rejadorado Temple from Toro.

This was followed with a salty, spicy, and smoky (from paprika), Toledo cheese from Portugal, made from a blend of milks. Michele suggested pairing this with the special Largueto Almonds and a bright and fruity white wine, Ermita de Nieve Verdejo.

The final cheese tasted, Michele’s best seller, was the Fulvi Pecorino Romano, a tangy hard cheese made in the Roman countryside from all sheep milk, that paired well with a Lambrusco Wine Jelly and the full-bodied red Rejodorado Temple.

We left to purchase some of the items offered, and to battle a cold night with strong winds, having been fortified by these products from the sunny Mediterranean warming our innards.
Posted by Phyllis Segura at 4:24 PM No comments: