The all new: RED DOOR COOKING WORKSHOP AND LIBRARY 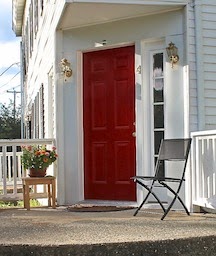 OCTOBER
Farmer’s Markets are available until the end of October.

TUESDAY, NOVEMBER 12 –6 to 8 PM    SAVORY & SWEET CREPES   Crepes are simple to make and can be frozen. We’ll make the classic Crepe Suzettes, as well as Savory Crepes with Artichoke and Spinach, and Sweet Crepes with Banana and Nutella, Strawberry fillings.
SUNDAY, NOVEMBER 17 –3 TO 5:30 PM   THE CONTEMPLATIVE KITCHEN  Applying principles of meditation to the preparation of food. Various steamed Dumplings: Momos.

TUESDAY, NOVEMBER 26 –6 to 8 PM   POTATO, ZUCCHINI OR CARROT PANCAKES  We’ll be frying, tasting and freezing these.

·       All classes are geared to the students level. Classes are limited to 4 people. Once a class is full an additional date can be added if there are 4 people. Advanced classes can be scheduled. Teens welcome.

·       All times are suggestions and can be custom altered. For private groups of four a specific date can be arranged.

·       All classes include take home recipes and eating what you made! The library is on the premises.
Be entertained! Cook, laugh and learn together! 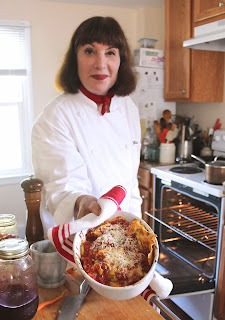 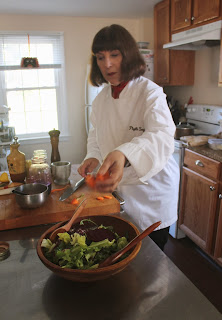 Posted by Phyllis Segura at 9:27 PM No comments: 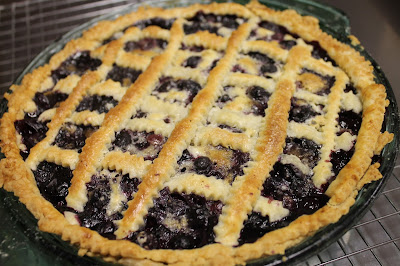 It's blueberry season around here. You can even pick your own. I'm going to give it a try but either early in the morning or after the sun peaks. Meanwhile, I purchased a quart or more already picked. Made an experiment with Blueberry Custard pie last night. Decided to make two - double the fun. And needed to try out my new oven to see how even and hot it gets. I'm also trying to work out the choreography in this kitchen; it takes a while to get your moves right.

I'm going to give you the recipe for the pie but only if you ask. Why? Because I'm too lazy right now and I'm waiting for some friends to come by and eat the pie and I've got to make some tea. IF YOU WOULD LIKE THIS RECIPE WRITE SOMETHING IN THE COMMENTS AND I WILL RESPOND.


Without being specific, I made a crust the usual way, flour, butter, bit of water. I bought salted butter in error and it might have helped frankly because the crust is about the flakiest I've ever made.

I used about a quart and more of blueberries. It looked like a lot in the bowl but once I put them into the pie shell it was only one layer, which turned out to be enough.

I sprinkled the blueberries with a bit of flour and arrowroot powder. By a bit I mean about a tablespoon full.

Then I prepared a custard with creme fraiche, sugar (the white stuff), an egg, well 2 eggs since I was making two, and also about a tablespoon of toasted and ground up almonds and hazelnuts, plus a capful of vanilla extract. I make my own vanilla extract with vanilla strips and vodka. It takes about 3 months but after that you just pour in more vodka. Mix well.

Roll out the pie dough really thin. Really. Preheat the oven to 400 degrees F. Place the bottom of the pie in the oven, having pricked it with a fork in several places, and bake for about 8 minutes. Take out and put on a rack to cool for about 10 minutes.

Roll out some of the dough meanwhile and cut into strips.

Then put the blueberries in, spread them around, pour the custard over. Cross-hatch the strips over the top of the pie. I also put some around the edge...you'll see in the photo. I baked it over 30 minutes...until golden as it appears. The blueberries and the custard mingled together to form a whole.

The thing that is interesting, and surprising to me, about this pie is that the bottom crust is crispy. It might be because of being so thin. I tasted it after it cooled and then again in the morning thinking it would be soggy, but it was still crispy. So no more guey cornstarchy gloppy pie!

Here are the photos: 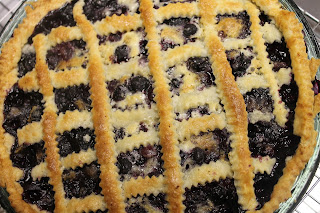 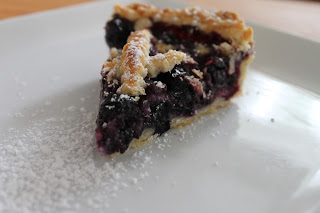 Here is the recipe:

Place the flour in a food processor and buzz a couple of times. Add the butter and buzz until just flaky. Add the ice water a tablespoon at a time. If the flour is dry you will need
all 6 tablespoons. Take out on to a floured board. The dough should be slightly most and
pliable. Knead together and mound into a disc about 6 inches by 1-1/2 inches high. Wrap in plastic or waxed paper and put into the freezer for about 10 minutes or the refrigerator up to overnight.

Roll out the rest of the dough and cut strips with a zig-zag cutter or a knife.

Wash the blueberries and put into a bowl. Toss with the flour and arrowroot.

Toast the nuts. You can use a cast-iron pan. Put them into a coffee grinder reserved for everything but coffee. Or if you have ground nuts, use them. Grind to a powder or paste.
Mix all the ingredients together with a whisk.

Take the pie dough out of the freezer and place on a flour sprinkled surface. Divide in half. Roll out to a very thin circle large enough for your pie pan. Place into the pie pan by rolling it up on the rolling pin and then unrolling it into the pan. Press down the sides and prick the bottom with a fork in several places. Place into the preheated oven on a sheet pan and back about 8-10 minutes. Take out and let cool on a rack for about 10 minutes.

Put the blueberries into the pre-baked shell. Pour the custard over. Place the dough strips across the top in a lattice and place some strips around the circumference of the pie, pressing down so that they stick. Brush some cream or an egg mixed with water over the dough.

Place in the middle of the oven on a sheet pan. Bake about 40 minutes or until the dough is golden and the custard and berries have set.

Posted by Phyllis Segura at 2:12 PM No comments: