CHICKEN WITH LEMON AND HONEY

Last night I spoke with my sister who lives in Florida and usually gets together with her friends for Rosh Hashonah. She was having twelve friends for dinner and they were all bringing something. They seem to stick to the traditional eastern European style of cuisine for these events. The foods from that time were based on the hearty fare of the cold weather that had undoubtedly started by then and to feed those hearty souls who farmed the land. Somehow that became the tradition in the US. In Israel the foods are now different and more Mediterranean and I’ve been told they shun the eastern European traditional foods.

My sister was making a chicken dish recommended by David Leibovitz with shallots. It sounded interesting so I took a look and found it online. I had a chicken in the fridge. I’ve been purchasing the Halal chickens at my local supermarket. The process they use is the same as kosher and the products are much less expensive. I found them to be really good and very clean with no bloodiness. They made a really good chicken soup that was very clear. I was impressed. I wanted a dish with lemon and honey. I have some Sumac, a berry with a lemony flavor, I seem to have purchased a couple of times forgetting that I already had some! Now I want to use it every chance I get. It’s red and looks a lot like chili or paprika.

Here is the recipe I came up with:

CHICKEN WITH LEMON AND HONEY

Juice 2 lemons. Put into pan with the butter, honey, rosemary, garlic, and soy sauce and leave until the butter is just melted. Stir and put aside.

Put the cut up chicken into a roasting pan toss with salt and pepper and Sumac.  Pour the butter sauce over and toss with your hands. Toss in the leek slices. Cut the 3rd lemon into small wedges and place them between the chicken parts along with the chunks of potatoes.

Place in the oven for 20 minutes then turn the pieces over. Roast another 30 minutes until the chicken is well browned.

Sprinkle and toss with the parsley, some more Sumac and a finishing flurry of salt.

You can make this recipe your own by varying some of the components. Perhaps a different herb or no herbs at all, olive oil instead of butter, and so on. You can’t go wrong as long as you use a lavish amount of seasonings. If you don’t have a leek, use an onion, or shallots. No potatoes? Leave them out. 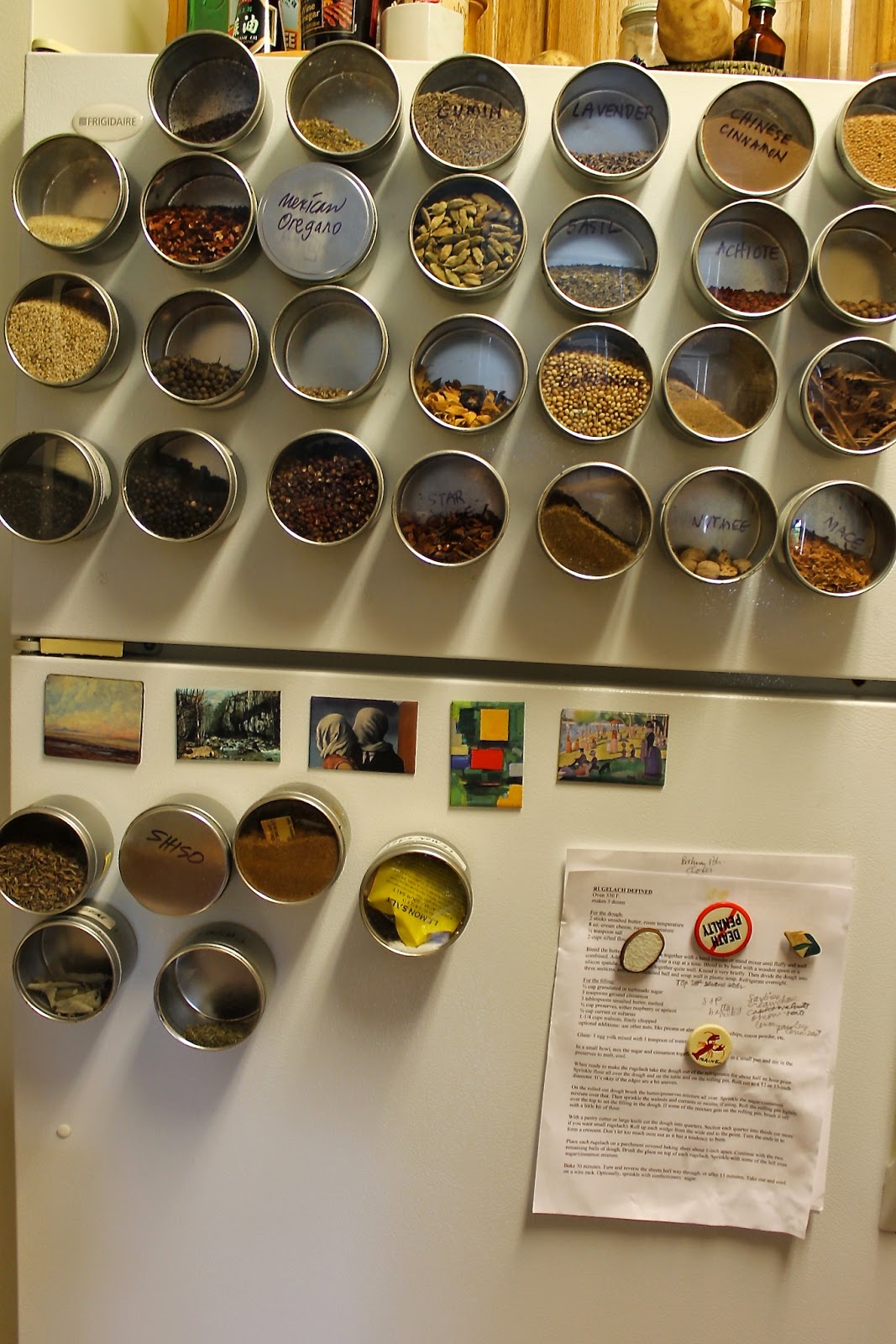 I have been storing my spices in these round metal containers with a clear covering on top. I bought them in a dollar store and the tops stay on very firmly. In my new place there are few drawers to store them. So I bought some magnets and glued them on to the bottoms of the containers, some required more than one magnet. It's a great solution. You do have to use some sense of awareness that they are there.

Posted by Phyllis Segura at 11:25 PM No comments: