Fish Chowder can be very simply made with just a few ingredients: a fish stock, salt pork or bacon (optional), potatoes, and fish. You can use clam broth for the fish stock, if you like.

However.
There are other ways on days when you have some enhancement time. Make your own fish stock (instructions follow below).

I purchased an assortment of very fine quality, never before frozen, fish from the vendor at the local Saugerties Farmers' Market. Though the prices are a bit higher than the supermarket, the quality makes it worthwhile. I only purchased small quantities of the most expensive scallops and shrimp. I happened to find at one of those Ocean Job Lot places that have name brand foods, a lovely bottle of lobster stock. Sorry I only bought one... 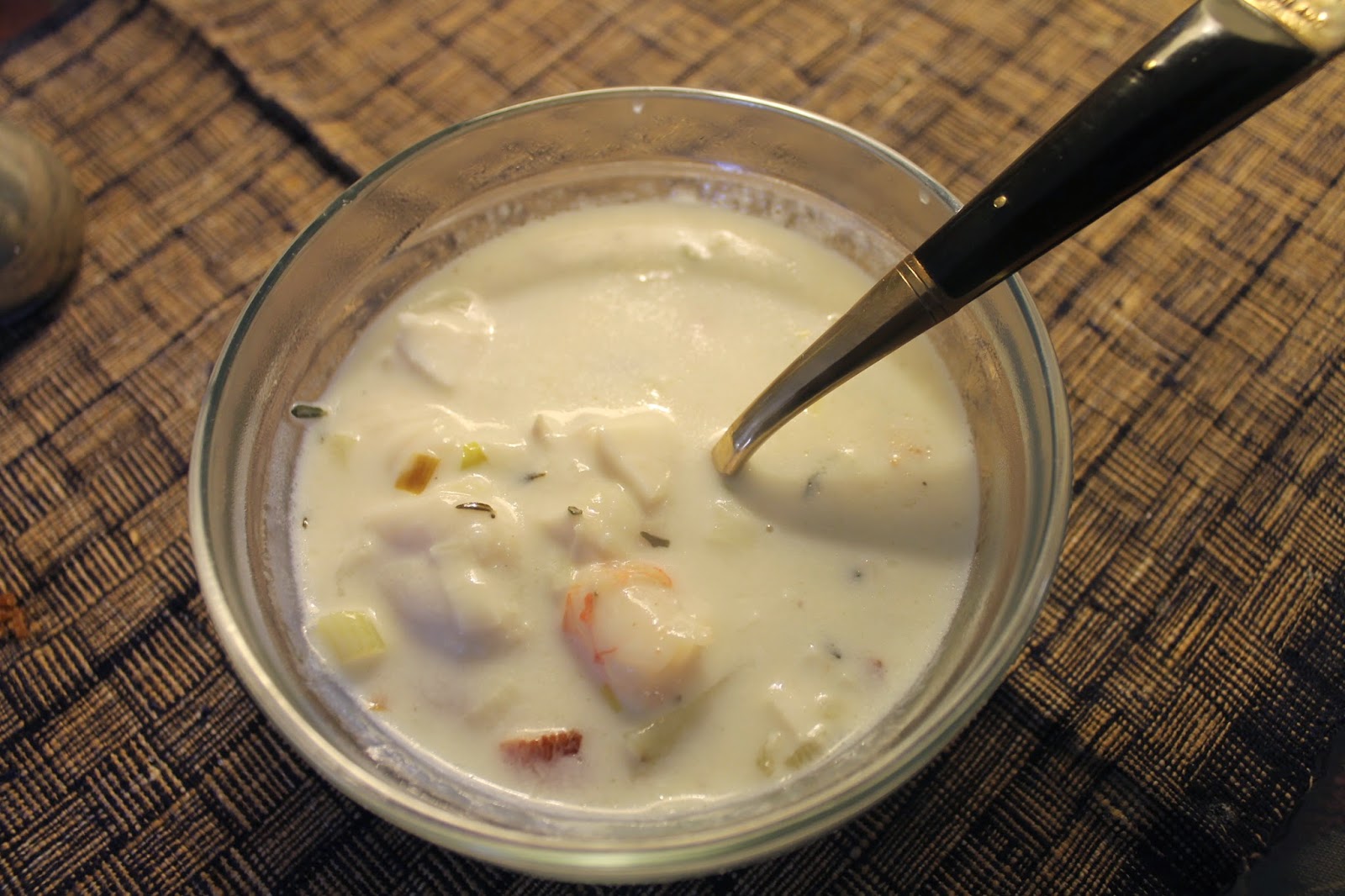 In a medium sized soup pot, render the bacon over medium heat, then remove to paper towels. Add a few slices of butter to the fat and saute the leeks, onion, celery and garlic only until transparent - do not brown. The quantity of leeks and onion should be equal. You could also use one or the other.

Add the potatoes and lobster or clam juice, milk and half and half. (If you want to use a different sort of milk, that's up to you. I also added some water to increase the quantity.)

Add the anchovies (or fish sauce, nam pla), Tabasco, thyme, bay leaf, salt and  pepper. Simmer until the potatoes are done. (If you've cut them into smallish cubes they'll cook rapidly.) Once the milk is in the pot don't boil it. Get it to that point of boiling and just let it simmer while quite hot. It's best to do this over medium heat, rather than high heat and let it come up to temperature slowly. You'll have to watch it up to this point.

Add the haddock. Don't cut it up, add it whole. It will fall apart in the soup all by itself. Add the rest of the fish, whatever you are using. Continue to simmer until the fish is cooked through. It won't take long. I like to keep it over a low heat so that the flavors marry.

Add a little bit of butter, if you like. Now you'll want to thicken it a bit. Take a tablespoon of potato starch and a tablespoon of water in a small bowl and mix well. Pour it into the chowder while stirring. Let it thicken. If you want it still thicker do the same thing a second time.

Serve hot. I like oyster crackers, if you have some.

Fish Stock:
Take an assortment of fish scraps: head, tails etc. and barely cover with water. Boil then skim. Add vegetables: onion, celery, carrot, peppercorns, parsley leaves and stems, thyme stems, bay leaf. Don't let it cook too long or it will get bitter. Cook 20 minutes. Steep for 10 minutes. You can use chicken stock which has a neutral taste, or clam stock but it will taste like clams - or chicken. Strain. Lightly salt. Chill as quickly as possible if you are not going to use it immediately.
Posted by Phyllis Segura at 2:27 PM No comments:

I did a cooking demo at the Woodstock Farm Festival this Wednesday, October 22nd. It's basically a Farmers' Market but it's Woodstock so they call it a festival is anyone's guess. It was very windy. I mean like "Blowin' in the Wind" kind of windy. Not the best for keeping a gas butane flame going, or for keeping my hair from blowing all over my head and face.

Click on the link below to view the video:


Usually at Farmers' Markets I go around to the farmers and select a carrot here, a potato there, a Japanese turnip, whatever looks good. Sometimes I figure out a flavor profile beforehand. This time I wanted to make something with coconut milk and some odd, not commonly used, spices. The profile, besides the coconut milk was with some ground Persian limes, cardamom powder, turmeric, ginger, pomegranate molasses and a bit of chili. Fresh cilantro for the top.

I started off by caramelizing some red onion. It's just slow-cooking until the onion somewhat "melts."
Then, in a soup pot, I sauteed some finely chopped ginger and added some cut up carrots. You can cut the carrots small. Usually I will start a soup with a few more aromatics, like onion and celery but did not in this case.

People are always asking about "rules" for making soup. If I had to come up with any "rules" I'd say that you start with some finely chopped vegetables, like onion, carrot and celery, or any other three. Each type of cuisine seems to vary what these three might be. For instance, New Orleans cooking, uses onion, usually scallion, green pepper and celery to start. I just used some ginger and carrots this day. It's an improvisational soup.

Then I cut up some of the vegetables I'd chosen, at random, from the stands: a tomato, Japanese turnips, a potato, garlic,  an apple, delicata squash and some Swiss chard.  I just cut them up, really helter-skelter while fighting the wind.

There was entertainment at the market that day: an accordion player. While he was a very good accordion player, there is something about accordion music that, (how else can I say this) makes me grumpy. The accordion music never stopped the entire time. Added to that, my friend and videographer, Bart, came by to record the windy cooking event. (Bart Friedman) With the accordion going that's going to be all anyone will hear. Oh well, thus the joy of serendipity.

I kept peeling and cutting up the vegetables in small pieces so that they would, hopefully, cook more quickly. The wind made the flame go out several times. After all, but the Swiss chard, was added and tossed about, plus about 1/2 teaspoon of the ground Persian lime,  1/2 teaspoon or more of the cardamom powder, 1/4 teaspoon ground turmeric, salt and pepper. I added a can of coconut milk and some water to cover.

We just had to wait for it all to boil...and wait and wait. You know a watched pot never boils and that pretty much sets the stage for this event. Blowing and boiling.

Rule two: put in your seasonings and ingredients, saute briefly, then add liquid. Bring to a boil. Lower the heat and let simmer until done, that means, when all the flavors meld and everything is cooked through. Simmer means a very light bubbling boil..just a little blurp every now and then.

After everything got hot, I julienned the Swiss chard leaves and tossed them in. Swiss chard tends to cook quickly. I'd also brought with me some cooked jasmine rice and cooked quinoa. I added those. I think I added too much of the grains as the liquid got absorbed...given more time and better weather I'd probably have added more liquid or less grains.

The tent started blowing around, the wind picked up and rain began to fall. A good day for soup.

Meanwhile, the caramelized onions were doused with some pomegranate molasses. I tasted them and they needed a bit of sweeting. Bart went over to the people selling maple syrup and came back with a piece of maple sugar! In it went, a little into the onions, a little into the soup, and we ate the rest.

I'm aware that this recipe sounds very much more complicated than the actual event. In a restless flurry, at the end, rather than saving the caramelized onions as a garnish, as originally intended, I add them to the soup. It was beginning to be more of a stew.

By now, the few people who had hovered around the pot were getting hungry and restless and they didn't care that the soup hadn't boiled: it was time to taste and eat! So I just gave in. I chopped up some of the massive bunch of cilantro (only $2, but no roots), spooned some into the little cups I was given, topped it with the cilantro and everyone ate. I kept going this way until there was no more left in the pot.

By then the rain had definitely begun, the farmers were packing up; the tents were blowing. As soon as I got everything packed up, drove my car around, the tent fell on my head.

It was quite a soup.

About two weeks previous, I'd done a cooking demo at the Saugerties Farmers' Market. Though the approach was similar the ingredients and resulting soup was quite different. I didn't take note but that soup had more of a rosemary and thyme flavor profile, plus I made some croutons with oil and garlic and topped the soup with some Toma cheese.

I'm looking forward to seeing Bart's video. I'll post it here when it's done. You can also hire Bart to make your videos.

It looks as though the outdoor market days are done around here for now. I'm looking for a place to have cooking demos locally. If you know of anything, give a shout. I also like to do lessons in people's homes privately. A popular approach is to have a dinner or dishes worked out. Everyone helps with the prep and they get a lesson. Then we all sit down and eat it.

I'll be doing a Cooking Demo at the Saugerties Farmers' Market this Saturday, October 11th, at 11AM. I'm giving out recipes for a Mushroom, Blue Cheese, Fennel Galette, and for an Autumn Persimmon and Pear Salad with a Ginger Vinaigrette. Stop by and see what I'll be making from gathering vegetables from the farmers who sell there.
Posted by Phyllis Segura at 1:19 PM No comments: