I'm offering a few classes soon at Ulster BOCES in Port Ewen, each for a very reasonable fee. Chances are you would take some food home. You have to register for these classes in advance. www.ulsterboces.org, 845-331-5050. The classes only run if there are a sufficient number of people to take them - at least 6 but no more than 10.

(I'd like to find other available places as well for teaching cooking around the Saugerties/Woodstock/Kingston area. Private classes in your home are available.)

Meanwhile see if any of these are of interest:

Everyone loves soup. Here is a chance to learn hot to make some international favorites from scratch. Class will be mixed hands-on and demonstration. We will make Corn Chowder, Carrot Ginger, Cream of Tomato, Chicken Coconut, and a Quick Onion Soup.
Bring an apron, your favorite knife, a container and kitchen towel.
Class fee: $35 plus $15 food fee payable to instructor.

We’ll explore the options of a diabetic-friendly pantry and an unprocessed food diet with many plant-based options. Recipes geared to spring ingredients with new potatoes, asparagus, chicken tostadas, a couple of fish recipes, the use of fresh herbs and spices, all quick and delicious. For the second session you’ll pick ingredients you want to use and we’ll create some personal favorites.
Bring an apron, your favorite knife, a container and kitchen towel.
Class fee: $69, plus $20 food fee payable to instructor.


Posted by Phyllis Segura at 3:25 PM No comments:

A special technique for cooking a chicken quickly. Marinate then broil placing the chicken low in the oven, not right under the broiler.

Use a whole chicken it’s more economical and you’ll be eating just one chicken. If you purchase chicken already cut up it’s usually from different chickens. (Some people ask if they can use all breast meat and boneless. I would not recommend that for this recipe.)

Cut it up into about 6-8 pieces depending on the size. First remove the backbone using shears or a cleaver. Then cut in half down the soft breastbone. Next, cut off the egg/thigh. Next, the breast with the wing attached and cut the breast in half.

It’s okay to cut off the wing separately.

Create a marinade. I like to use about ¼-1/2 cups soy sauce, depending upon the size of the chicken, add about 6 cloves of garlic roughly cut or grated – your choice.

Optional additions are about 1tablespoon roasted sesame oil, a few star anise, and a couple of whole chili peppers.

Place it all, chicken and marinade, into a plastic bag then seal the bag and move the chicken pieces around so they are all coated. Refrigerate from 3 hours to 2 days. The longer the better. I usually take it out at least once to move the pieces around.

When ready to cook prepare a sheet pan with aluminum foil or parchment paper. Place an oven rack way down at the bottom of the oven and preheat the broiler.

Shake off the marinade from the chicken and place the pieces skin side up on the pan. Drizzle with about 1 tablespoon roasted sesame oil.

Place the pan with the chicken on the low rack. Close the oven door.


Let it broast until you see it browning and bubbling, between 10 and 15 minutes should do it.

Then take the pan out and turn the chicken pieces over. Return to the oven and broast about another 10 minutes. 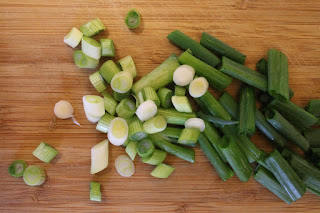 Serve it hot or room temperature. Top with cut green onion pieces and a sprinkle of lightly toasted sesame seeds. I like the unhulled seeds mixed white and black together.

The chicken remains very juicy using this method and cooks very quickly. I think you’ll like it. 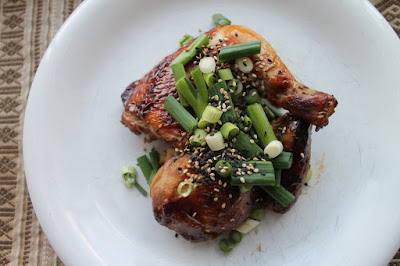 Posted by Phyllis Segura at 3:12 PM No comments: