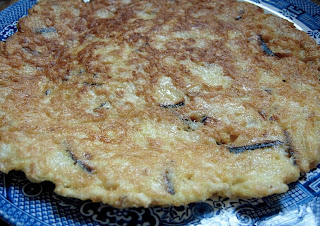 MATZO BREI
1-2 pieces of matzo, broken into pieces
2 eggs
pinch of salt
water or milk
Butter
Confectioners Sugar, optional
Jam, optional
Additional salt, optional
Break the matzo into a bowl and cover with either water or milk. Let the liquid soak through the matzo then drain and squeeze out. Add 2 eggs and beat together, oh yes, and a pinch of salt. Put some butter into a frying pan to melt until the foam stops. Add the matzo-egg mixture. Pat down with a fork. Cook until the bottom is golden. Take a plate that fits over the frying pan and turn the matzo brei into it, return to pan with the uncooked side down. Cook until the bottom is cooked through. Slide onto a fresh plate.
Serves 1.
Double or triple the recipe and the size of the pan for a bigger Matzo Brei. I used a pan that could hold two or three servings so mine was very thin. It's also good to have a thick Matzo Brei, in which case you would use a smaller pan or make more batter and use the larger pan. Are you still with me?
Serve either sweet with the confectioners' sugar and/or jam, or salty with the salt. Either way you've got to eat one every year around this time. Then put it away until next year when the craving starts. If you eat a lot of this your stomach might let you know you have overdone it. Join the crowd.
Posted by Phyllis Segura at 4:13 PM 1 comment:

Email ThisBlogThis!Share to TwitterShare to FacebookShare to Pinterest
EGGPLANT JUGGLE

This braised dish fell together, almost by itself, just from what was in the pantry and fridge. I love the way eggplant melts down to taste and feel very meaty. The addition here of the fennel, instead of celery, adds a bit more flavor interest. You can spice it up with the jalapeno and red pepper flakes if you must, and I must, but it tastes good without them. just a touch of sweetener removes any possible bitterness. I don't know a good substitute for the Zatar and it is a major component here so well worth locating - try Fairway and Kalustyans or any Middle Eastern grocery. Some friends had raved about Trader Joe's frozen artichoke pieces so I bought some. Right they are. Sometimes frozen artichoke hearts still have tough outer leaves but these do not. A few squirts of lemon and a dash of finishing salt add mouth-watering appeal. It's not a pretty dish - very dark - so you will need to garnish it well. Worth the effort.

Saute the onion in the heated olive oil. Add the eggplant and fennel with some of the chopped leafy part of the tops, then the garlic pieces. Add the sundried tomatoes and some of the oil, and all of the artichokes. Stir and toss to get all the pieces amalgamated, oiled and heated. Stir in a sprinkle of the Zatar and few red pepper flakes, the chopped parsley, and a squirt or two of honey or agave nectar, your choice. Add a pinch of salt. Stir well for about 2-3 minutes.

Add about ¼ cup of water then lower the heat and cover to let the vegetables steam briefly. Either continue cooking slowly on top of the stove or place in a
300˚F. oven well covered for about 1-1-1/2 hours to braise slowly.

Serve hot or room temperature with a squirt or two of fresh lemon juice and some freshly chopped parsley. 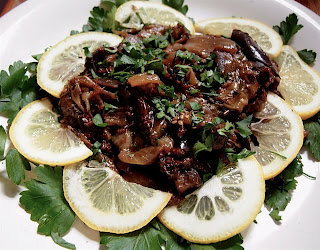 This is what Eggplant Juggle looks like with a wreath of parsley and lemon.

Email ThisBlogThis!Share to TwitterShare to FacebookShare to Pinterest
Labels: eggplant

GO TO www.amorebakedgoods.blogspot.com to see the Cookie Class photos.
Posted by Phyllis Segura at 11:43 PM No comments:

He might even make a difference! Congress passed 4 billion towards school food programs for a ten year period. Compare that with 7 billion and more a month in Afganistan and Iraq.

Next posting will be about the Cookie Class that just completed. And, if you go to www.amorebakedgoods.blogspot.com find images of cookies. Soon to come will be more Passover cookies. You still have time to order some, especially The Zip.

BECOME A FOLLOWER OF THIS BLOG: JUST CLICK ON Follower. Thanks.
Posted by Phyllis Segura at 1:37 AM No comments:

We're in the news:

Phyllis Segura is a personal chef who specializes in entertainment cooking. You could say her office is your kitchen.

While dinner parties are a forte, Chef Segura will also come to your home and whip up as many as 20 meals, which she calls her Five by Four plan. That’s enough food for a family of four for five nights, which can be put into a freezer and pulled out ready to warm and eat.

Chef Segura will work with the client to establish a menu, then shop, prepare, cook, serve and clean up — right in your home.

Segura was in the textile design and art world for years before deciding to try to put her skills and knowledge of herbs, cooking and entertaining to better use as Cooking on the River. She trained with chefs in Europe and the U.S.

“I’m a great gift,” says Segura. People are giving her service as gifts for spouses birthdays, new moms, people who are just getting out of the hospital and might not be able to cook for themselves for a while as well as for special occasions. She will come to your home for private cooking classes.

Last year Segura started Amore Baked Goods since her clients were all raving about her custom made oat-based cookies that are also available gluten-free and refined sugar-free.

Segura calls one of her special event services “Girls or Guys Night In.” Instead of having the gang all go out somewhere, the ladies (and guys) can have their special night right at home, with none of the work.

Segura said she has been doing some work for charitable organizations and that as word of her service spreads, she’s been able to serve an area from the lower Hudson River all the way up to Poughkeepsie, Newburgh, Tarrytown and New York City. Segura also performs regular cooking demonstrations in local Rockland County libraries and teaches at BOCES in Nyack.