(adapted from NY Times, Shmil Holland's "Schmaltz" and 2nd Avenue Deli cookbook)
There was a recipe in the New York Times in March 2011 for Hamantaschen and since I had not made any before, though I had collected several recipes, I thought it was time to give it a go. Some friends were coming by for Corned Beef and Cabbage and I thought Hamantashen would be a great dessert, even though I was also making Flummery (more on that later). St. Patrick's Day and Purim were about a day apart this year, so I decided to celebrate St. Purim's Day!! I tried making the dough from the NY Times recipe and found that it did not hold together so I turned to the 2nd Ave Deli cookbook for the dough and pretty much followed that recipe except that I added some lemon zest. I like to put lemon zest in almost everything. Either use organic lemons or wash a lemon very well with dishwashing soap and hot water, then wipe dry. The Hamantaschen turned out  pretty good (see hips) and they weren't very sweet so if you like sweet, add sugar to both the dough and filling, you silly person.
3 cups flour
2 teaspoon baking powder
1/2teaspoon salt
1 cup pulverized almonds (Trader Joe's Ground Almonds)
Mix the above together.
1 cup or less of sugar
1 stick unsalted butter
Beaten together, then add
3 eggs, beaten
1 teaspoon vanilla
1 teaspoon almond extract
1 teaspoon lemon zest
Add dry to wet. Mix until it forms a ball then take out and knead.
Egg glaze:
1 egg, beaten with 1 tablespoon heavy cream
Divide the dough into four sections. No, you don't have to refrigerate it first. Roll each section to about 1/8-inch thick. Cut  into 4 inch diameter rounds. Put about a teaspoon of filling in the center. Fold two sides together and pinch. Fold up bottom but leave an opening in the center so you can see the filling. Brush with egg glaze. Sprinkle with sugar.
Do the same to the rest of the dough and re-roll the scraps. Place on a greased or parchment covered sheetpan. Bake 20 minutes at 375 degrees F., until golden. Cool. Serve with some powdered sugar sprinkled on top, if you like.
3/4 cup poppy seeds
1/2 cup pecans, finely chopped
3 tablespoons honey
¼ cup brown sugar
grated zest of ½ orange
2/3 cup raisins or sultanas
juice of ½ lemon
2 teaspoons lemon zest
½ tablespoon brandy
½ tablespoon cointreau or other orange liqueur
1-1/2 teaspoons vanilla extract
Soak the poppy seeds in boiling water then drain. Process with honey, brown sugar, raisins, juices, zests, liqueurs, vanilla extract. If you are not thrilled with how ground up the poppy seeds are then put the entire mixture into a large mortar and grind away with a pestle until you love what the mush has become. Put it all into a saucepan and cook it, while stirring, until the ingredients all meld together. The end result looks like a poppy seed caviar. If you love it, everyone else will too.
Posted by Phyllis Segura at 12:01 AM No comments: 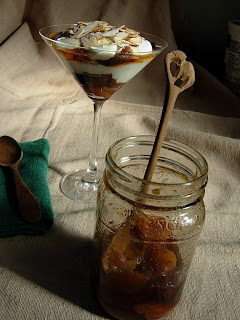 Half-full jar of compote with Parfait
in the background. 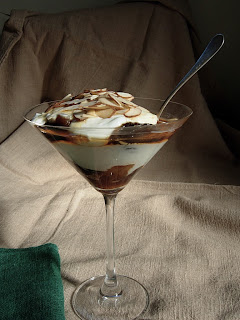 The Parfait.
1 pound assorted dried fruits (pears, apricots, apples, peaches, prunes, cranberries, raisins)
1-2 cinnamon sticks
Lemon peel, about 3 strips off of a lemon, without the white pith
Star anise (optional)
7 oz. Plain Greek yogurt
Cinnamon powder
Real Maple syrup (optional)
Toasted Almond slivers
Put all the fruits into a saucepan. Cover with water. Add the cinnamon sticks and lemon peel and optional star anise. Bring to a boil, then simmer until the fruit is soft. No need to add sugar. If the water level goes down, add more. The fruits, as they are plumped will absorb the water. The water turns into a nice sauce and you want to have that moisture. Depending upon how dry the fruits are...the simmering should be for only about 15-20 minutes. I always let the fruit sit in the saucepan to cool and absorb the flavors before I remove them and put the Compote into jars.
To make the Parfait: Take a glass that pleases you and begin layering starting with a bit of the compote and sauce, then the yogurt (it helps to stir the yogurt well first), then a layer of compote. Top with the toasted almonds and a sprinkle of cinnamon and a drizzle of maple syrup.
Posted by Phyllis Segura at 3:15 PM No comments:


Went to check out some things and was pleasantly surprised. Event put together by the Hudson Valley Food Network www.hvfoodnetwork.com
I sat in on a really good talk by Jay Levine of the Hudson Valley Backyard Farm Company, about pest management in the organic garden. He specializes in helping people set up organic gardens in their backyards (or frontyards). The talk was mostly about identifying the beneficial and harmful pests. I purchased some fresh eggs from Barbara Taylor-Laino of Midsummer Farm. She teaches lots of good workshops at the farm in Warwick, NY. The eggs were so fresh that the chickens there (see photo) were so relaxed that they were laying eggs in front of our eyes!
I also attended the workshop about Creating Water Kefir Sodas by Dina Falconi, an herbalist of Wild Earth Programs.  She gave everyone part of the 'mother' to make their own sodas. I think I managed to 'kill' mine the other day. They require a temperature of 65-80 degrees so I kept it in the oven which was off...until I turned it on forgetting it was there.... 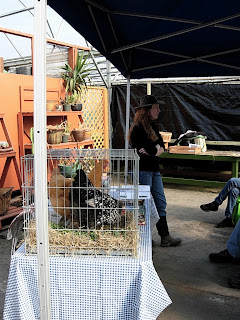 Barbara in background. Chickens in foreground. 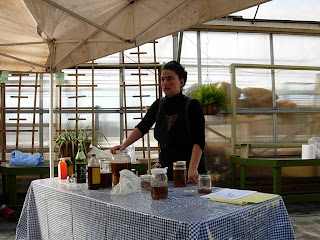 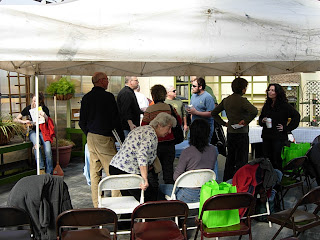 One of the workshops ending. 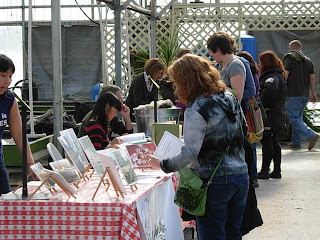 Attendees browsing.
Posted by Phyllis Segura at 3:00 PM No comments: