" Everyone had a wonderful time and were still commenting on your glorious food the following day." CJ
This was a recent dinner party for seven women who had rented a house to spend a weekend in honor of a friend who was soon to be married, a bachelorette party, if you will. In the picture of the appetizer you will see the plate that was available to use. When you rent a house most of the supplies are catch as catch can. I try to visit in advance to find out what is there and what needs to be be brought in for the dinner. These plates were nice with a Brooklyn theme on them. The recipe for the appetizer follows. It was something I invented especially for the occasion using locally available ingredients. You can appreciate the complexity that results in simplicity. Here is the menu:

This is a multi-layered stack with Black Forbidden Rice, topped with a mixture of Avocado and Cucumber in a Citrus Vinaigrette, topped with half Smoked Salmon and half Smoked Trout and garnished with Salmon Caviar and Capers. A piquant sauce is added to peek the flavors and retain moisture.

FIRST LAYER
To make the Forbidden Rice:
1 cup rice
¼ cup combination vinegar  (2 tablespoons white wine vinegar/2 tablespoons rice vinegar)
2 tablespoons cane sugar
1 tablespoon salt
Rinse the rice, drain and let dry in the strainer for 15 minutes. Add the rice to 2 cups of water. Bring it to a boil, cover, cook for 10 minutes over medium heat, then 10 minutes over low heat. The water should be absorbed by then, if not give it another 5 minutes. Then remove from the heat and leave covered to rest for 15 minutes. Put into a wooden bowl.
While the rice is cooking make the vinegar sauce by combining the vinegars, sugar and salt and heating it until the sugar and salt are dissolved.
Then drizzle the vinegar mixture over the rice that has rested the full 15 minutes using a bamboo rice paddle or spatula. Fanning with the paddle to separate the rice until the mixture is absorbed. Cover with a damp towel and leave.

SECOND LAYER
1 ripe Avocado
1 cucumber, preferably a Kirby
Remove the flesh from the Avocado and cut into small cubes. Peel and deseed the cucumber and cut into cubes about the same size. Mix together. Add about 1-2 tablespoons of Citrus Vinaigrette and a pinch of salt. Combine lightly careful not to mush the Avocado

Make a Citrus Vinaigrette:
Juice of a lemon, lime and half an orange
Good quality extra-virgin olive oil
Combine well, beating with a fork.

THIRD LAYER
Smoked Salmon (local)
This calls for hot smoked salmon, not lox or Nova Scotia. I buy mine from Hookline Fish Co. on Route 28 in Kingston.
Smoked Trout (local)
I buy Lenny B’s smoked trout either directly from him or from Cheese Louise also on Route 28, Kingston, or Sunfrost on Route 212 in Woodstock.
You need about a half cup of each. The salmon is easy to separate from the skin and shred. The trout requires more attention as it is a whole fish. Be careful to remove all the bones. Then shred the flesh. This is best done with your fingers. Put each fish into a small container. Note: It would be perfectly fine to just use one of these fish instead of both.
The salmon caviar only requires you to refrigerate the jar and to remove some caviar. The capers should be rinsed and drained and loosely chopped.
You also need a round metal mold. Small cans of tomato sauce with the ingredients removed and the top and bottom of the can removed works well. Or, you can visit a kitchen supply store and get a small mold. (add measurements)

Now that you have all the ingredients prepared you can begin to plate.

It’s preferably to have a chilled plate but if you don’t that’s okay.

1 -Place the mold in the center of the clean plate. Take a few spoonfuls of the prepared Forbidden rice and press it to the bottom.
2 -Then take a few spoonfuls of the avocado/cucumber mixture and cover the layer of rice, spreading it out.
3 –Then take some smoked salmon and place it over one half of the Avocado/Cucumber mixture. Do the same with the trout. Press both down slightly.
4 – Take a few salmon eggs and place it on the smoked salmon. Do the same with the capers on the trout.
5 – Shake the container with the sauce and using a zigzag motion put some on top of the stack and down the front of the plate.
6 – Carefully pull up the metal mold. If some flakes of fish fall off don’t worry about it. You can place them back if you like.

I used two different types of watercress. I found a hydroponic variety at the local health food store that gets sold still in the soil, and also used the more common type. You can use whatever greens you like. Separate the sections into small pieces that don’t require cutting in order to fit into someone’s mouth. Toss in the Belgian Endive separating the leaves. Add some thin slices of red cabbage for color. Julienned carrot and other ingredients could be added for color. Nasturtiums would be nice. Coat and toss all the salad with a small amount of the Citrus Vinaigrette, keep it light.

Place on the plate surrounding the top half. 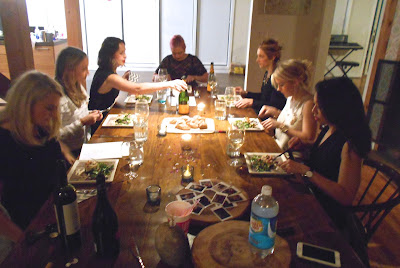 Posted by Phyllis Segura at 3:32 PM No comments:

Lately some people have been wondering why at Halloween when there is a plethora of pumpkins offered at stores, farm stands and farmer's markets they are mostly the ones that are carved. Those pumpkins are sold as decorative objects and not as food. But they could be used as food.

In our American culture that is how those round orange pumpkins are mostly used for decoration and then discarded. They seem to have been bred to be rather tasteless and watery. Some of the small ones are called Pie Pumpkins. There are so many more varieties of delicious pumpkins or squashes. All are rather beautiful to look at and contemplate.

Many people purchase the cans labeled "pumpkin puree." They contain all sorts of squashes but not those round orange pumpkins used for Halloween. When I make pumpkin pie I generally use Butternut squash that I cut in half and roast.

Recently I found a display of many varieties of pumpkins or squashes in Woodstock along with a chart explaining some of their uses: 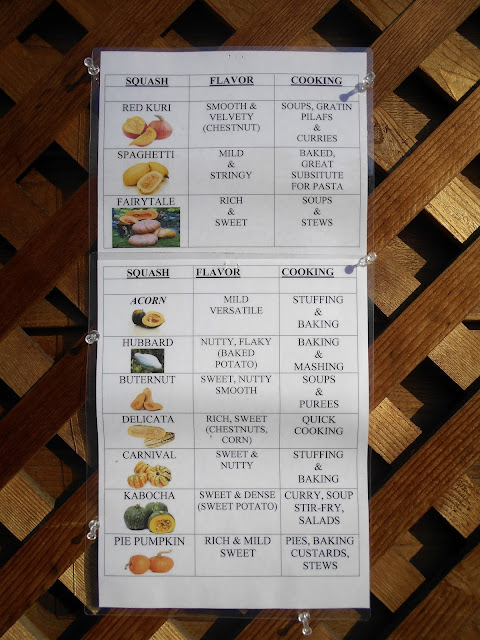 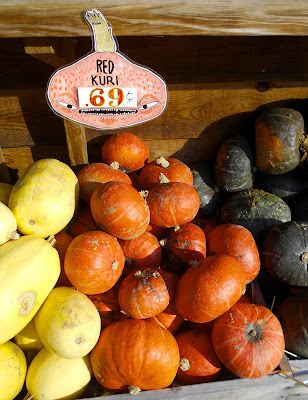 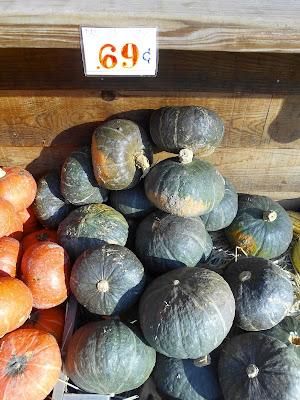 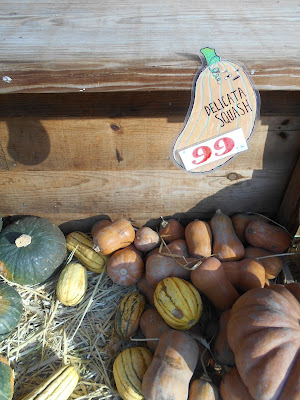 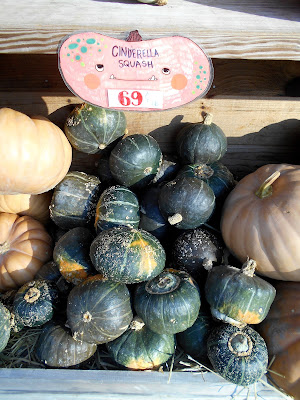 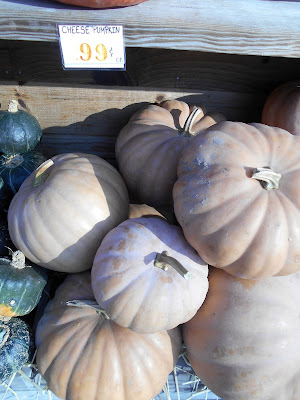 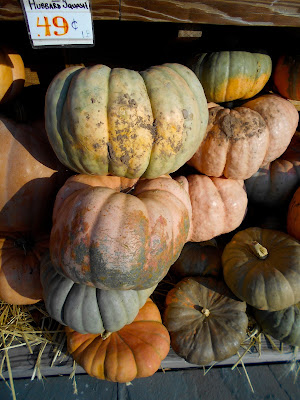 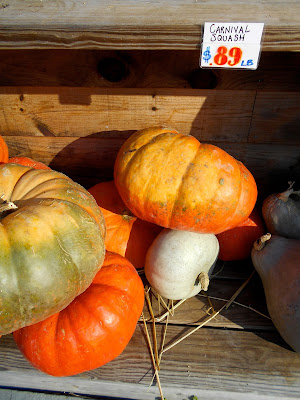 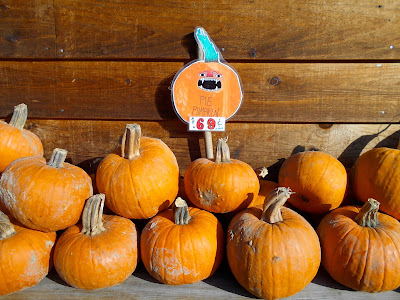 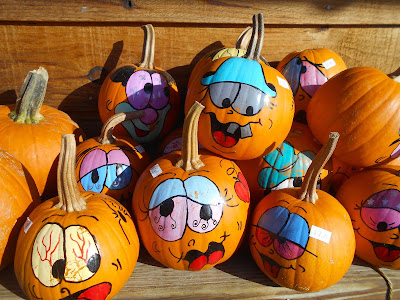 Posted by Phyllis Segura at 1:31 AM No comments: