Around mid-April I did a cooking demonstration using Artichokes. On the menu was an Artichoke Tapenade; a steamed artichoke with an aioli sauce; braised baby artichokes  with bacon, baby yukon gold potatoes and rosemary; crispy fried baby artichokes with fried capers, parsley and lemon; and a raw artichoke salad with balsamic and extra-virgin olive oil, over baby arugula with shaved parmesan.  Of course I never managed to take any photos....sorry. There are so many delicious artichoke recipes.

The most daunting aspect of artichokes, for most people, is their preparation and grooming. Since the artichoke is a thistle it has thorns at the tips of its leaves. Cut off the tips with scissors creating a graduated appearance or use a sharp knife and cut straight across. Always rub the cut parts with lemon to prevent discoloration. Snap off two or three layers of the large outer leaves. Then, using a paring knife, cut away the dark green parts at the bottom stem end. Either scape out the center choke before or after cooking.

For baby artichokes, pull off the leaves until the yellow leaves are visible. Then trim the tips. Don't worry about the chokes as they haven't been formed yet. If you slice them paper thin and toss with a bit of a balsamic vinaigrette, you can easily eat them raw as part of a salad.

Use the baby artichokes, sliced in quarters, to fry until crispy. Add some drained and dried capers, and parsley leaves. They will all crisp up nicely. Drain on some paper and toss with salt and squeezes of fresh lemon. Eat immediately.

The tapenade or pesto can be made with steamed artichokes or use them from a jar that has the artichokes in water. Drain well. Into a processor add the artichokes, some chopped garlic, a nut - either toasted almonds or pine nuts, chopped parsley,  parmesan cheese, lemon juice and olive oil.  Use your imagination and taste here. A good one is also made with artichokes, kalamata olives, roasted tomatoes, garlic, lemon and olive oil. Salt and pepper.

If you like steamed artichokes, trim and groom them well, and put into a steamer stem side up and steam until soft. This takes from 25-35 minutes. But check before because you don't want the artichoke mushy.

Most people, when you say the word artichoke, immediately think: stuffed artichoke. They are very good that way but it's not the only way to eat them.  You can make a nice breadcrumb or potato based stuffing, remove the choke, and stuff the center and sneak some stuffing between the leaves. Place in a saucepan tightly bunched, pour in a little white wine and and some extra-virgin, cover and let cook until soft. If you like you can partially steam the artichoke before adding the stuffing.

There is even a way to prepare a stuff artichoke using a microwave. Check with a Barbara Kafka recipe and be brave. I tried it, and as usual I have no luck or knowledge of cooking with a microwave. But if you are one of the people who cooks everything in a microwave give it a try. I only got a burnt thistle with melted plastic.

Artichokes are cleansing and are packed with iron. Oh, and don't forget a simple steamed artichoke with a garlic-y vinaigrette. The first time I ever tasted an Artichoke was at Elaine's Restaurant in New York City. I've got to get back there soon because I hear that they now serve it with the heart cut out for you and the leaves separated in a circle around the heart. Sounds too good to be true.
Posted by Phyllis Segura at 5:26 PM No comments:

An article from today's NY Times about photographing the food you eat.
http://www.nytimes.com/2010/04/07/dining/07camera.html?hp
Posted by Phyllis Segura at 2:18 PM No comments:

Email ThisBlogThis!Share to TwitterShare to FacebookShare to Pinterest
CLASS AND DEMO UPDATES

My class GREAT HORS D'OEUVRE AND APPETIZERS begins tonight April 7th, at BOCES Nyack for 3 sessions. The class is full with 12 people and some on the waiting list. Tonight, time-permitting, we will be preparing:  Pissaladiere, Tuna Tartare on Wonton Crisps, Mushroom Cigars, Asparagus in Puff Pastry, and Shrimp stuffed Piquillo Peppers. If I'm not too crazed I will try and take some photos...but you know I get too busy and often forget to do so.

Next Thursday, April 15th, I will be doing a cooking demonstration at the Nanuet Public Library from 7 to 9 PM in the Main Conference Room. This is the first in a three-part series. I will be demonstrating ARTICHOKES, prepared three different ways. These demonstrations are always free to the public and anyone can attend. You get to taste the food at the end!
Posted by Phyllis Segura at 12:21 PM No comments:

Recently I got a phone call from a past client who had hired me to cook for her mother, Gladys. At that time I made about 20 meals for her to put in her freezer, and then I came back about a month later for a new menu. I think we did this about three times. This time her three children wanted to have about a week's worth of food since Gladys was eating even less than before. She had recent knee surgery and they wanted to help her out. I hadn't seen Gladys since then, about four years ago, and we had a nice reunion. Here is a picture of Gladys for which she kindly submitted just to oblige me: 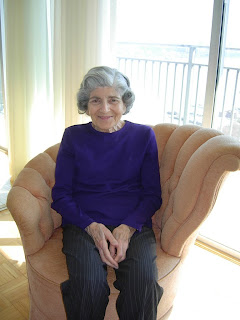 Hi Gladys, You're looking great!
Here are a few of the things I cooked for her. One or two recipes will follow. 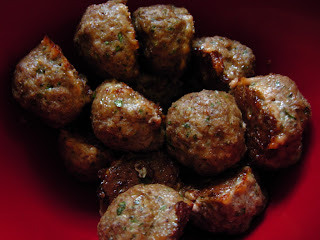 These are some lamb meatballs that have been baked in the oven.
They are made with ground lamb, grated onion, breadcrumbs, oregano, parsley,  lemon zest, chopped garlic, and egg. You can also add some chopped mint and ground allspice.
Salt and pepper, too.
Next three pictures are the vegetables that have been stir-fried, then with the lamb balls added, and then the Avgolemono (egg-lemon) sauce used to combine everything together. 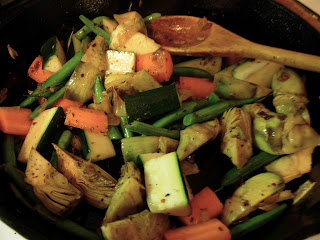 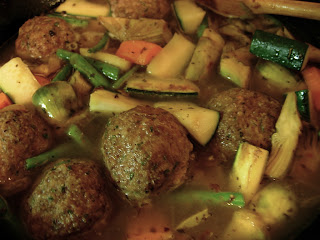 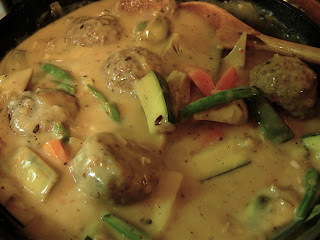 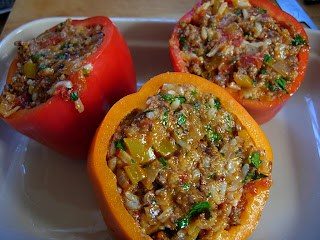 The stuffed peppers before roasting. They had a tomato sauce poured over them. 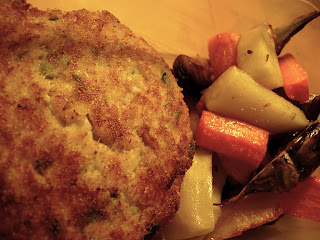 Email ThisBlogThis!Share to TwitterShare to FacebookShare to Pinterest
MEALS FOR GLADYS

Recently I was asked to prepare some meals for Gladys by her three children. They had hired me to cook for her about three or four years ago. At that time I made 20 meals that she froze and about a month later did it again, and once more after that.  I hadn't seen Gladys since then until I got a call from her daughter who wanted to know if I was 'still around.' She joined with her siblings to get some meals for Gladys who had recently had knee surgery. Gladys could definitely stand putting on a few extra pounds. Some of us might wish that was our problem.

Here is a picture of Gladys who generously posed

Posted by Phyllis Segura at 2:36 PM No comments: